Considering proposing to your girlfriend? Are you trying to ignore hints from your significant other that it might be time to pop the question? When money is an issue, and even when it isn’t, moissanite engagement rings could be the perfect alternative to the diamond.

These gems, which were discovered in a meteor by Henri Moissan in 1893, aren’t diamonds, but they have similar properties to them. In fact, many jewelers can’t tell the difference between moissanites and diamonds.

What is a Moissanite?

The moissanite stone was discovered in an ancient meteor. The similarity of it to diamond made it an appealing gem stone, but there wasn’t even enough to create a single pair of earrings. Instead, it was taken to a lab and recreated. Moisssanites look like diamonds, are hard like diamonds and have a similar brilliancy, even though they’re synthetically produced. However, even amidst the similarities, there are some differences:

Most people think of cubic zirconia as a diamond substitute or a fake diamond – moissanite is entirely different. When compared to cubic zirconia, moissanites are harder.

The color is clearer, and they are much more brilliant. Cubic zirconia tends to be hazy, have very little brilliance and a lot of white to the stone. Moissanites are a better quality than cubic zirconias, so they are also more expensive, even though they’re only a fraction of the cost of a diamond. 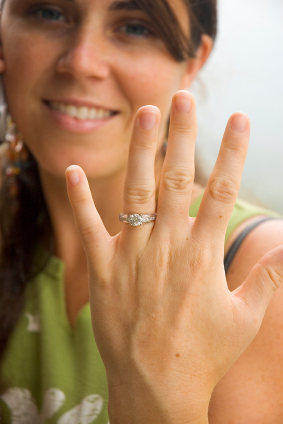 Note that although moissanite can make a diamond substitute, it’s not a diamond- nor is it a “fake diamond.” It’s a different stone entirely, even though it can look like a diamond and may even fool a jeweler.

For diamonds, the cut, carats and clarity of the stone will dramatically affect its price, making the average cost of a small diamond range dramatically from $1,000 to $6,000.

Moissanites are significantly less expensive. For instance, a good-quality 2-carat moissanite stone will typically cost around $1,500. A 2-carat diamond with good color and clarity can cost over $20,000.

Created by Charles and Colvard, many retailers carry this, including department stores, such as JC Penney and Kohl’s. Some small, local business may also carry it and you can talk to the jeweler about what he or she has and the differences between each.

While it’s possible to purchase a moissanite online, it’s risky business. You wouldn’t buy a diamond online, so why buy a moissanite online? Instead, use the map available on the Moissanite.com website to find out where they are sold near you – all you do is type in your zipcode and state.

Let’s face it, even when a guy is completely ready to propose, the idea is still terrifying. What if she says no? What if she doesn’t like the ring? What if it doesn’t fit?

The solution for most of these problems is simple. It’s only recently that the trend has been for men to surprise the girl with an engagement ring. It’s much more traditional for the guy to discuss marriage with her and then bring her along to see what she likes and discuss what you can afford. If you don’t like the idea of shopping before you’ve proposed, you can propose in a jewelry store like they did in old movies.

This allows you, guys, to see what she wants. Does she want one stone or three? Like diamonds, moissanites come in a variety of stone settings and cuts: princess, round, oval, pear, marquise, radiant, heart-shaped and cushion cuts are all available. She can also try the rings on, so you know what size to buy it in.

Making sure the girl likes the ring you’ve bought is important. She’s going to be showing it to lots of people and wearing it, presumably for the rest of her life. And you want her to be proud of it – and by extension, you.

About moissanites and diamonds, there’s clearly a huge price and style range. Even though not all jewelers can tell the difference, that doesn’t mean you should go out and buy a moissanite and try to tell her it’s a diamond.

It’s important to know the woman for whom you’re buying the engagement ring and talk to her about what she wants. Some women may prefer to have a large moissanite, especially a good one that looks like a diamond. Others may prefer a small diamond. It depends on the girl. The only way to know is to ask. And if you want it to be a surprise, you can always ask her best friend.

Each woman is different. Her engagement ring should flaunt those differences by capturing her uniqueness and her interests. Find a ring that she loves and that sparkles as much as her personality, whether it’s a diamond, a moissanite, an emerald or some other stone.