In today’s society, more and more gay couples are taking their relationship to the most serious commitment level by celebrating their union through marriage or a legal partnership. Along with these celebrations come several rituals and customs. This article will explore the many options and choices gay couples have if the choose to exchange wedding bands.

To Engage or Not to Engage

Although engagement is the ritualistic time period before heterosexual marriage, it is not as common in gay couples. If gay couples would like to become engaged before their wedding, they can follow the same guidelines, however. 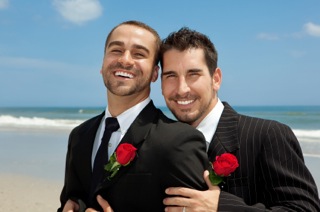 They need to take into consideration the factors of budget, size and personal style. In many gay couples, both partners may opt to wear an engagement ring to symbolize their commitment. This is more common with lesbian couples.

Love and Pride is a ring retailer that sells gay engagement rings in a variety of styles, from subtle and traditional rings to bold attention grabbers. Rings are priced as low as $100.

Sumiche is a lesbian owned business that uses sustainably mined and fair trade materials for all of their jewelry, an important consideration for the earth conscious gay couple. Finally, George Sawyer rings provide a unique collection of rings for gay couples. The rings are crafted through the ancient Japanese art of Mokume Gane, giving all rings a special blend of golds to create a custom finish. If you are not tied to a widely known brand you can likely save money by buying direct from an individual designer like Deborah Olague. She is a close friend of mine who has designed Mokume rings since 2003. She made our wedding bands & she also sells them to many other jewelry retailers who then add significant mark up for people who do not purchase direct from her. We liked her work so much we ordered a second set of larger rings for our 9th anniversary.

Symbolism is of the Essence

The gay lifestyle is rife with symbols; therefore, it is very important that gay couples invest time in finding an artisan that is able to design the wedding rings that reflect the many symbols of homosexuality. Designing their own custom wedding bands with the help of such an artisan allow gay couples to express their personal preferences, as well.

The astrological Mars symbol dates back to Roman times. It is now commonly seen as the symbol to denote the male gender and is a circle with an arrow offshoot, is often used in gay marriage bands. In fact, two conjoined Mars symbols has been a symbol of gay love between men for almost four decades. Somtimes, a Mars symbol will even connect an engagement ring with a wedding ring; the metals are fused together.
The circle is symbolic of the spirit. The arrow is symbolic of strength, and also has a spiritual element in representing the crescent moon.

The widely known triangle symbol is also incorporated into many gay wedding bands. In Nazi Germany, a pink triangle pointing downward was used to mark gay men when they were detained in concentration camps.

In the 1970’s, gay activists inverted the symbol and embraced it; by turning it upside down, they were making a powerful statement that they are proud of themselves and not going to accept any hatred for their sexuality. The triangle also marked lesbians; a black triangle, in fact, marked lesbians, prostitutes and women deemed undesireable otherwise in the camps. Since the triangle was not exclusive to gay women, it is used less in gay women’s wedding jewelry but it is still seen nonetheless.

In gay women’s wedding jewelry, the Venus symbol is more commonly found. This symbol represents power for women in general. Other symbolism, such as figures from gay artwork or yin yangs, are also used in gay jewelry. In lesbian specific jewelry, symbols such as hearts, flowers, or shapes resembling the female genitalia are used often, as well. The labrys, a double-headed axe used by the Amazons and the Greek lower case letter “L”, the lambda, are also used to represent the liberation of gay couples when they are united in marriage.

Jewels, Gems and All That Sparkles

Perhaps one of the oldest traditions in the design and creation of gay wedding rings is the use of precious gems in the jewelry. As in heterosexual wedding bands, gems are chosen for a variety of reasons: their connection to elements of our universe or the significance of the partners’ birth months.

Diamonds are always a popular choice for heterosexual couple wedding jewelry, but gay couples tend to lean toward warmer stones, like rubies, garnets and sapphires. Sometimes, couples may even choose to have their rings designed with gems of many different colors, symbolizing the rainbow that is representative of the gay culture. Rings with more gems result in a bigger price tag, however; couples need to keep their budget in mind when choosing what gems, if any, to include.

A Wedding Band vs. a Freedom Ring

Sometimes, gay couples will choose to utilize what is known as a freedom ring to serve as their wedding rings. These rings strongly symbolize the struggle for gay freedom and acceptance; they often incorporate rainbow colors. They are often comprised of a series of six different interlocking metal rings to represent the many different tyes of people that fight for gay freedom, whether gay themselves, male or female, or of mixed cultures and races.

All the Colors of the Rainbow

Gay couples are encouraged to think about what color meanings reflect their relationship. Down to earth and laid back couples may embrace oranges and reds and other “earthy” tones; couples that rarely fight and harmonize in what seems to be almost perfect unison might prefer blues.

The Traditions of the Rings

Since ancient times, couples have worn wedding bands on the third finger of the left hand because it was believed to be the finger that hosted veins that were connected to the heart. Wedding bands were made from precious metals to ensure the wealth of the marriage.

When gay couples take part in the rituals and traditions of the ring exchanging, they are participating in ancient customs while embracing the relatively young concept of gay coupledom. They are standing up for equal rights for all types of love, whether between a man and a woman, a man and a man, or a woman and a woman.

Although many gay wedding rings and bands are designed much like their heterosexual counterparts with traditional golds and silvers, some are being designed in more sophisticated and contemporary materials, like stainless steel and platinum. These modern styles often are more personal and suited to the individual couple’s styles and commitments to each other to better reflect their relationship.

Overall, gay couples have more choices than ever and a wide range of selections for their wedding rings.

One Response to Gay Wedding Rings